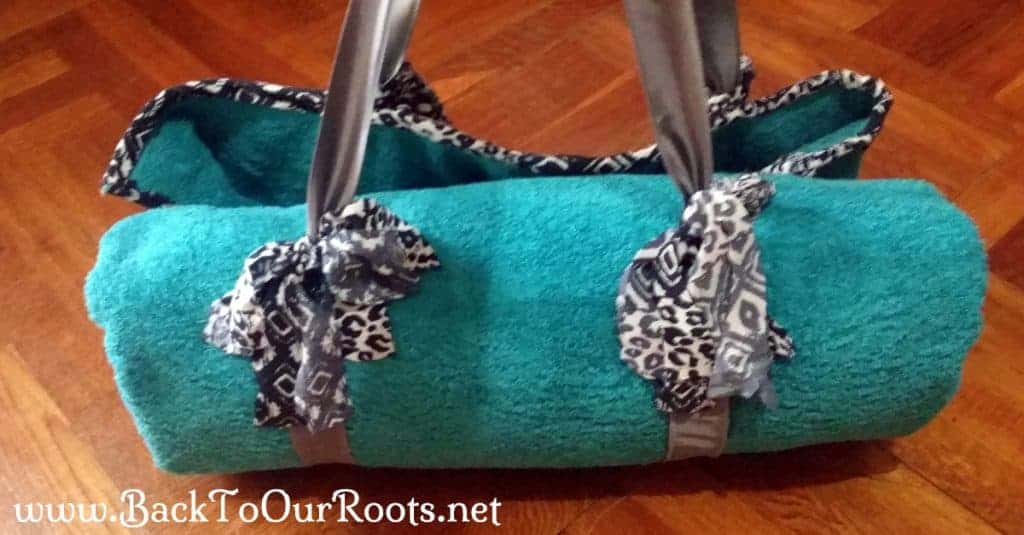 Whether you are going to the beach, camping, or even to a baseball game this is the perfect project for you!

When I was growing up, we kept this huge, ratty, thousand pound blanket in the trunk of the car for any occasion we might need to sit on the ground. I am not kidding!

The fabric was literally hanging on by the thread, it was so big I would be tripping over it, and it weighed so much we would take turns carrying it.

We finally let that blanket go after many years of being dragged around, but since then I have always been prepared with a beach towel or blanket of some sort!

So when I saw this amazing towel/pillow/bag, I jumped right on it to make my own!

What you will need:

First lay out the towel. You need to put the pillow form about an inch(ish) from the top of the beach towel. 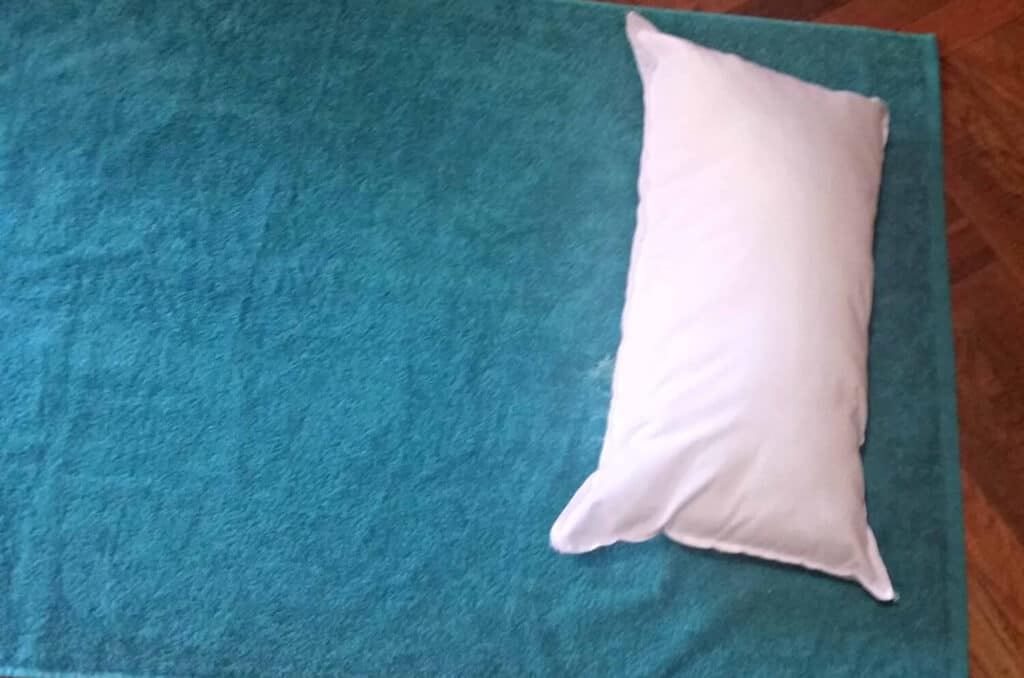 Next fold the pillow and towel over itself so that the pillow form is covered with the towel. 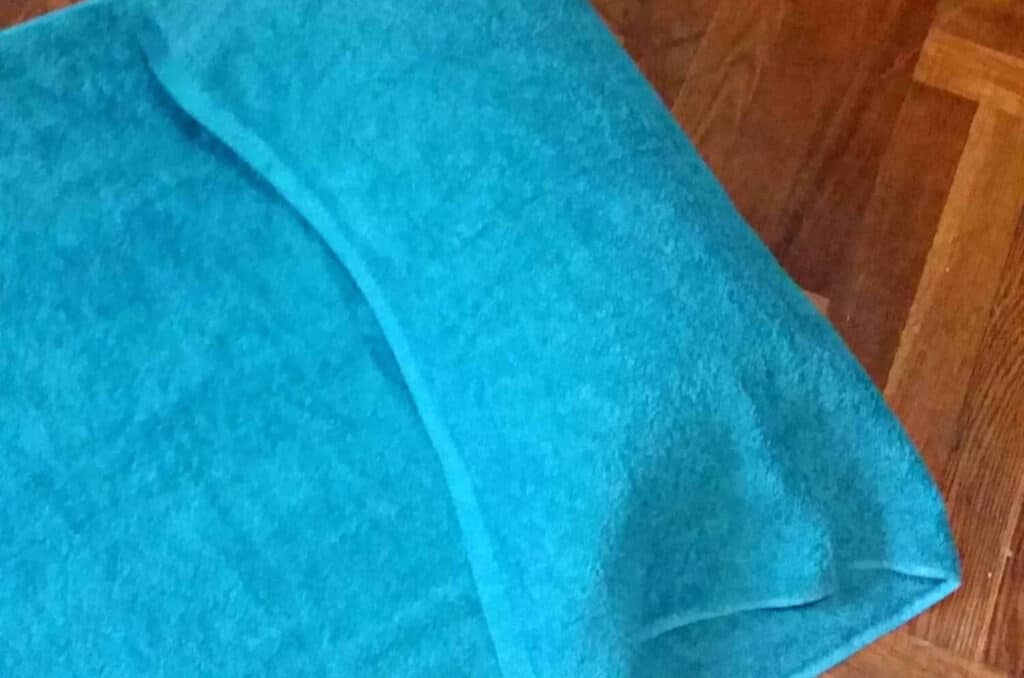 Line up the sides and pin the towel down so it won’t move and then start sewing from one corner.

Don’t worry about your stitches being seen, they will be covered up with fabric. 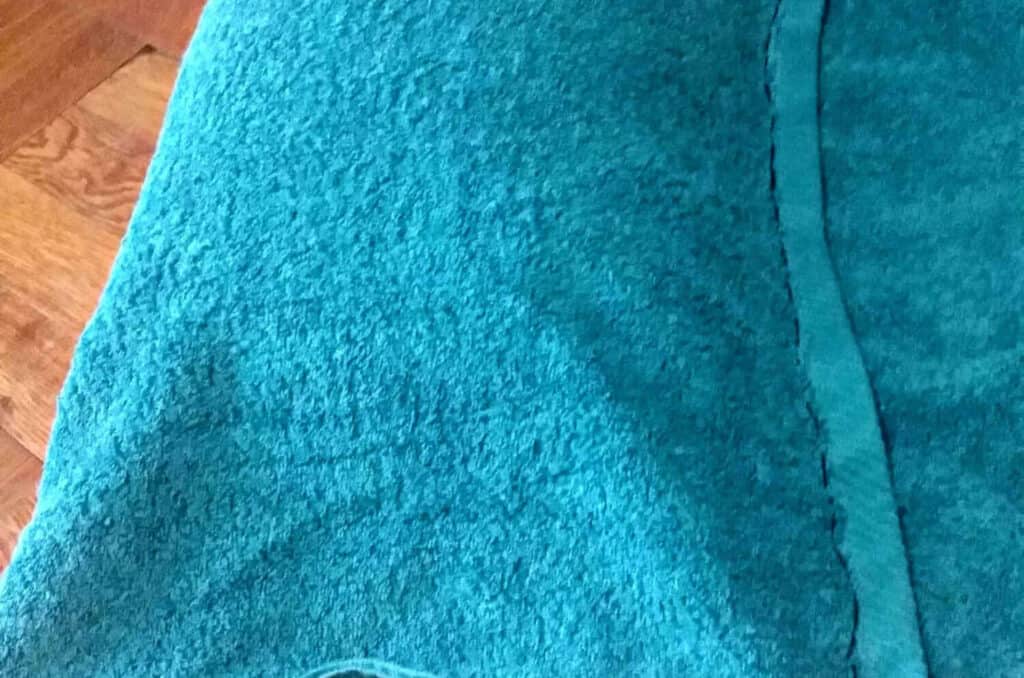 Now cut two long pieces of ribbon. These are your handles, so make sure they are the length that you are comfortable with.

Take one of the ribbons and fold the ends into a triangle shape.

Working with the bottom of the towel (the end that is not folded over the pillow), sew one end of the ribbon about a third of the way in from the side along the hem. 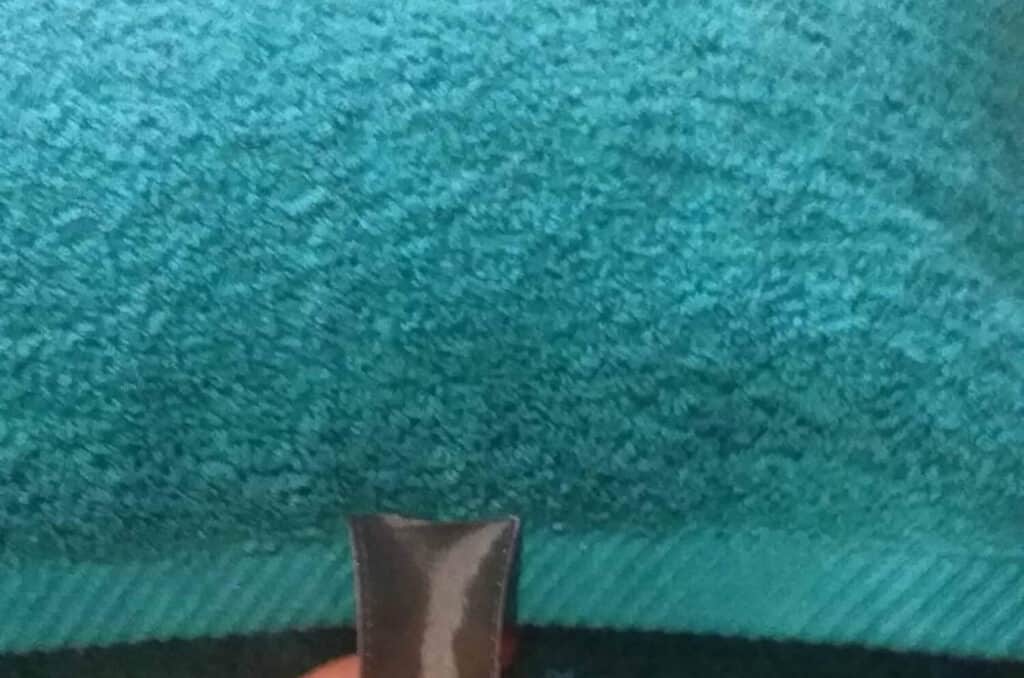 Do the same with the other end of the same ribbon, attaching it to the other side of the bottom of the towel. This makes a handle loop from one ribbon attached to both sides.

I made the handle cuter by sewing buttons over the ends of the ribbons. 🙂

Once you have attached the first handle, you need to fold the towel twice.

This is going to help us sew the other handle on in the right place. 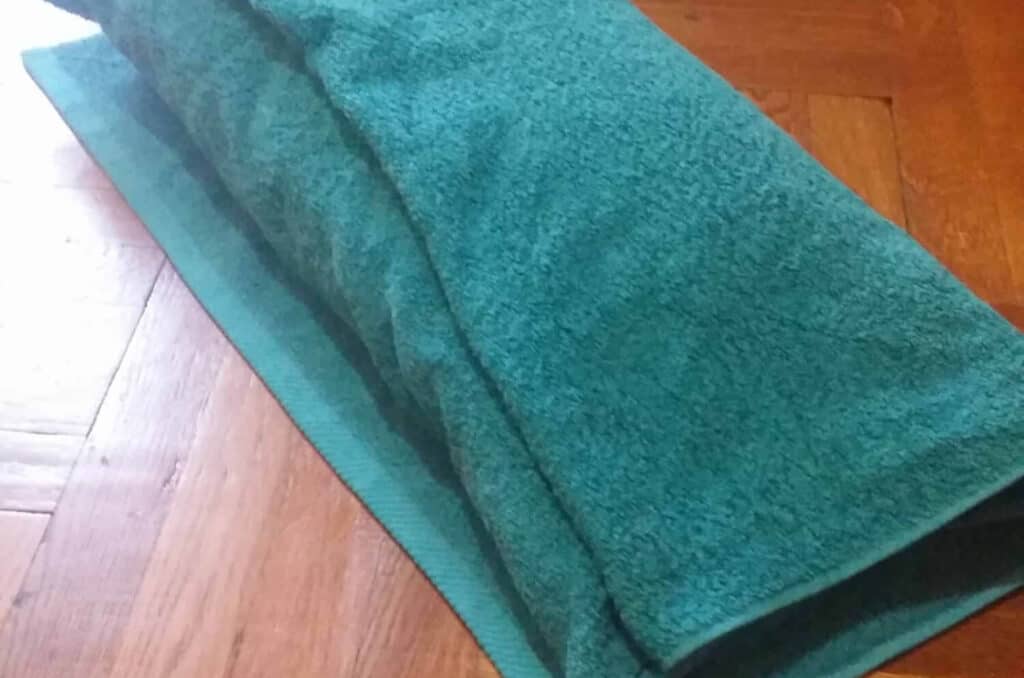 Now mark the fold that is even with the top and bottom edges with two small dots to indicate where you will be sewing the two ends of the other handle.

This is going to be about halfway down the back of the towel when it is laid out.

Now this is important, and I shouldn’t have to mention this, but out of excitement this is where I went wrong the first time. UNROLL THE TOWEL BEFORE YOU SEW ON THE OTHER HANDLE.

Once you have sewn on both handles, roll it back up to make sure the handles are even, and a good length for you. 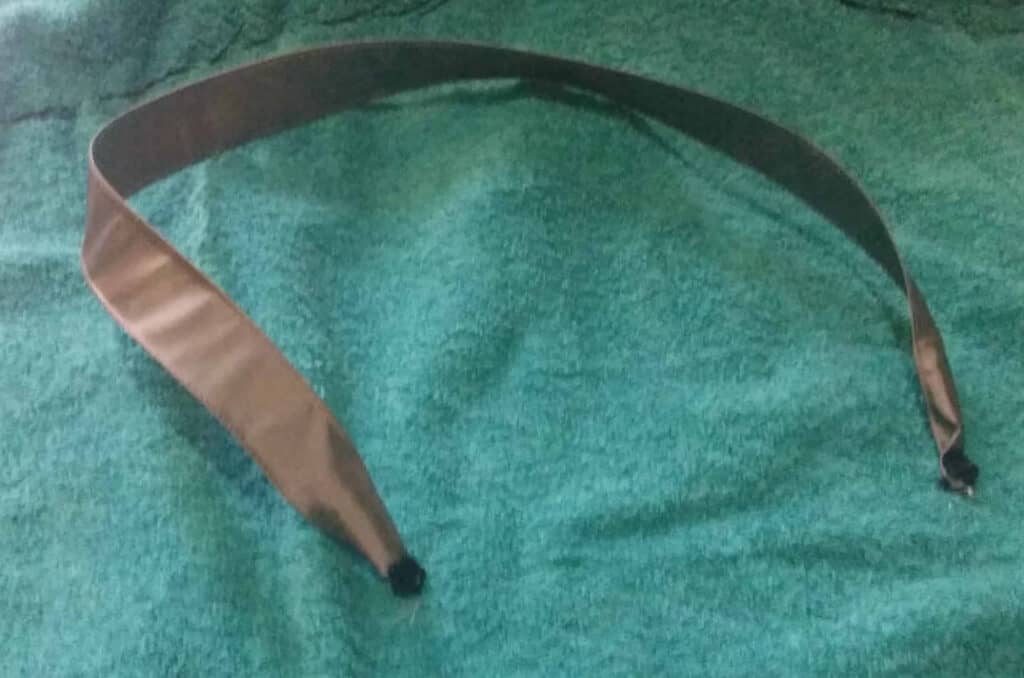 Now that we have the basics done, next is just spritzing it up! This is where the fabric scraps come in.

I actually had an old pair of pants that I didn’t fit into anymore so I cut strips out of them to use. These strips need to be about two inches wide so you can fold them over the edges.

I used fabric glue for this part but you could also use an iron on adhesive. You need to cover the sewn edges around the pillow part, the two long sides, and then the bottom. 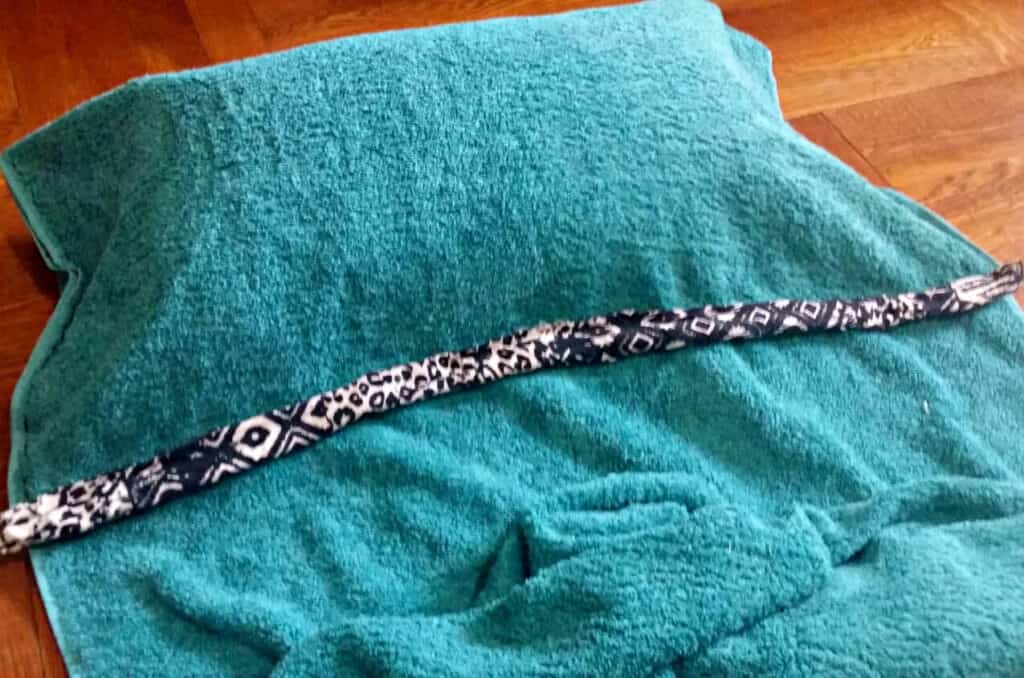 Cover the seam around the pillow 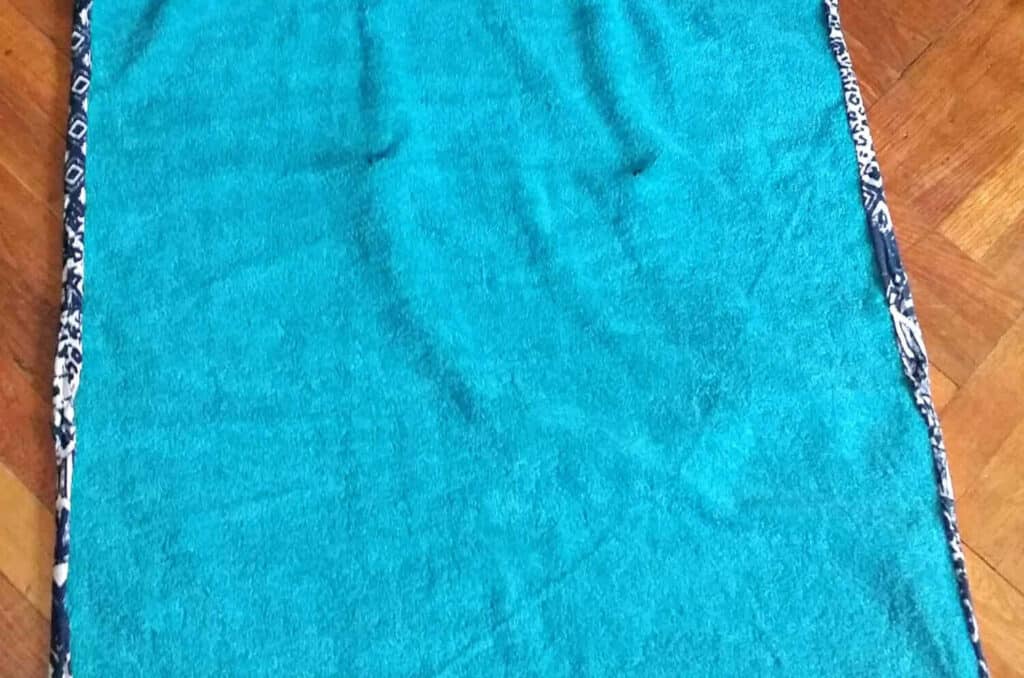 And all the way around

I had a few scraps left over, so I took two small pieces and tied them like fringe to the bottom of the ribbon handles. 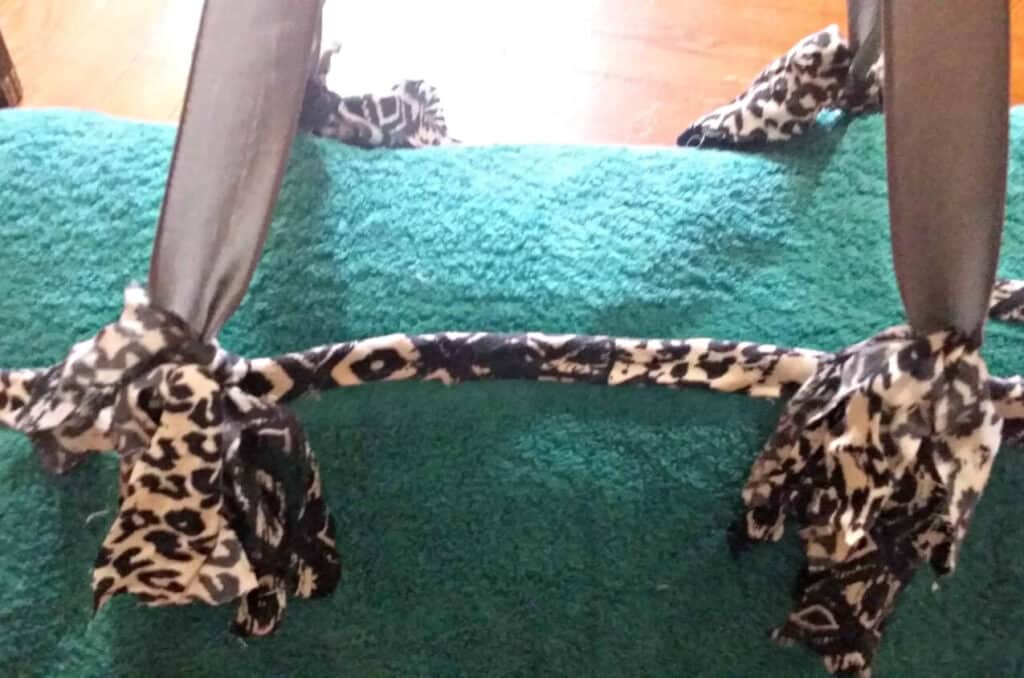 Jazz up the handles

To use, I folded the two sides in towards the middle, then rolled it up. Super cute! Now you are good to go! 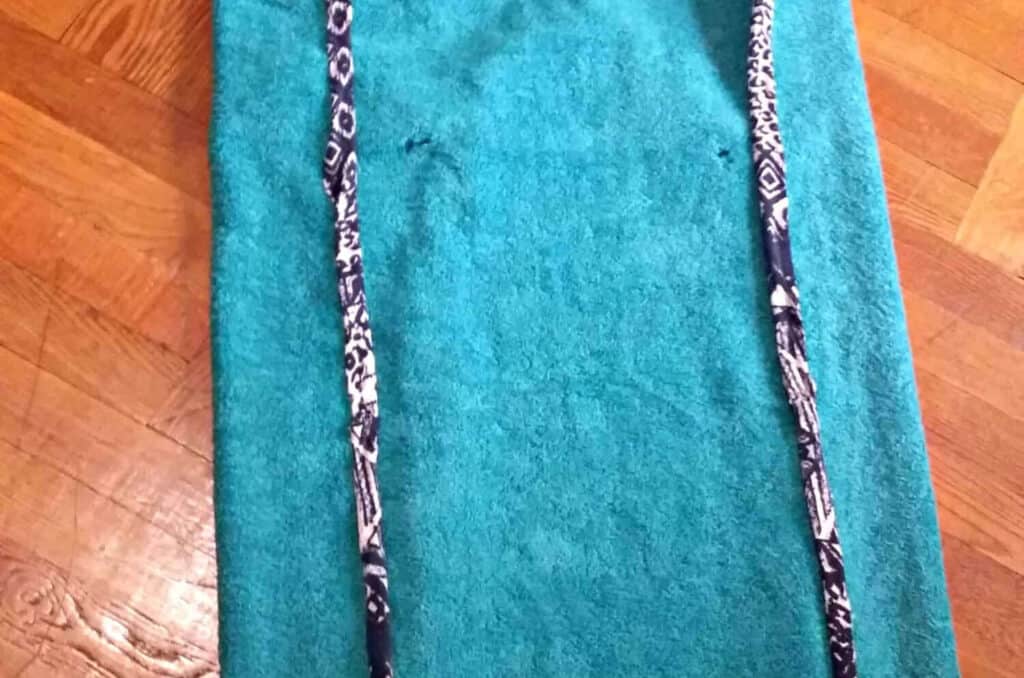 Fold in the sides and roll it up

Have fun being outside this summer! 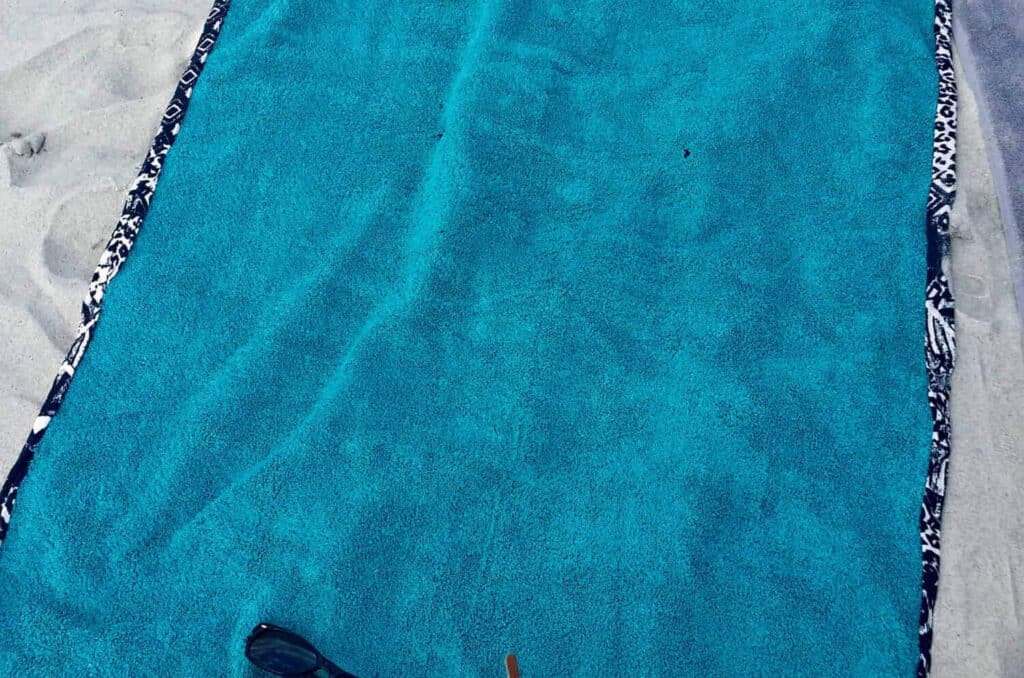 And for more summer fun, stock up the cooler with a shrub or some water kefir to quench your thirst at the beach! 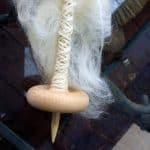 How to Make Inexpensive Drop Spindles at Home 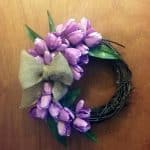 How to Make a Quick & Easy Spring Tulip Wreath 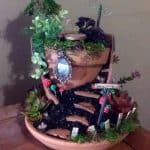 How to Make Your Very Own Fairy Garden 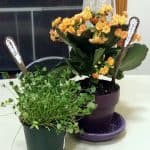 « Microwave Ovens ~ Do They Fit in a Traditional Food Kitchen?
How To Make Pretty Vintage~Look Fork Plant Markers »