Jump to Recipe Print Recipe
I really, really, like pecans.

When I was a kid we would get boxes from my grandmother out in West Texas in the fall, and there was always a couple of gallon bags of pecans.

Daddy would spend all of football season cracking them, and Mom would use them just as fast as he could get them out of the shells.

Lots of our holiday goodies contained those little treats, and I carry on that tradition.

My Mom now has pecan trees of her own that she and Daddy planted 30 some years ago.

When I lived far away from home I would get care packages stuffed with a few gallon bags of pecans every year.

Now I live in the same town and I get them whenever I want.

And because I use pecans in just about everything, I thought I needed a pecan crust recipe, too.

So here it is.

I love this recipe!

It’s crunchy and slightly sweet and perfect for all kinds of yummy deserts.

Check out my Cherry Cream Cheese Pie recipe to fill it up. It’s made with homemade cream cheese and it’s amazing in this crust.

You could fill it with a sweet potato pie.

Or maybe with Spiced Plums.

Or, maybe get a little crazy, and put Rhubarb in it! 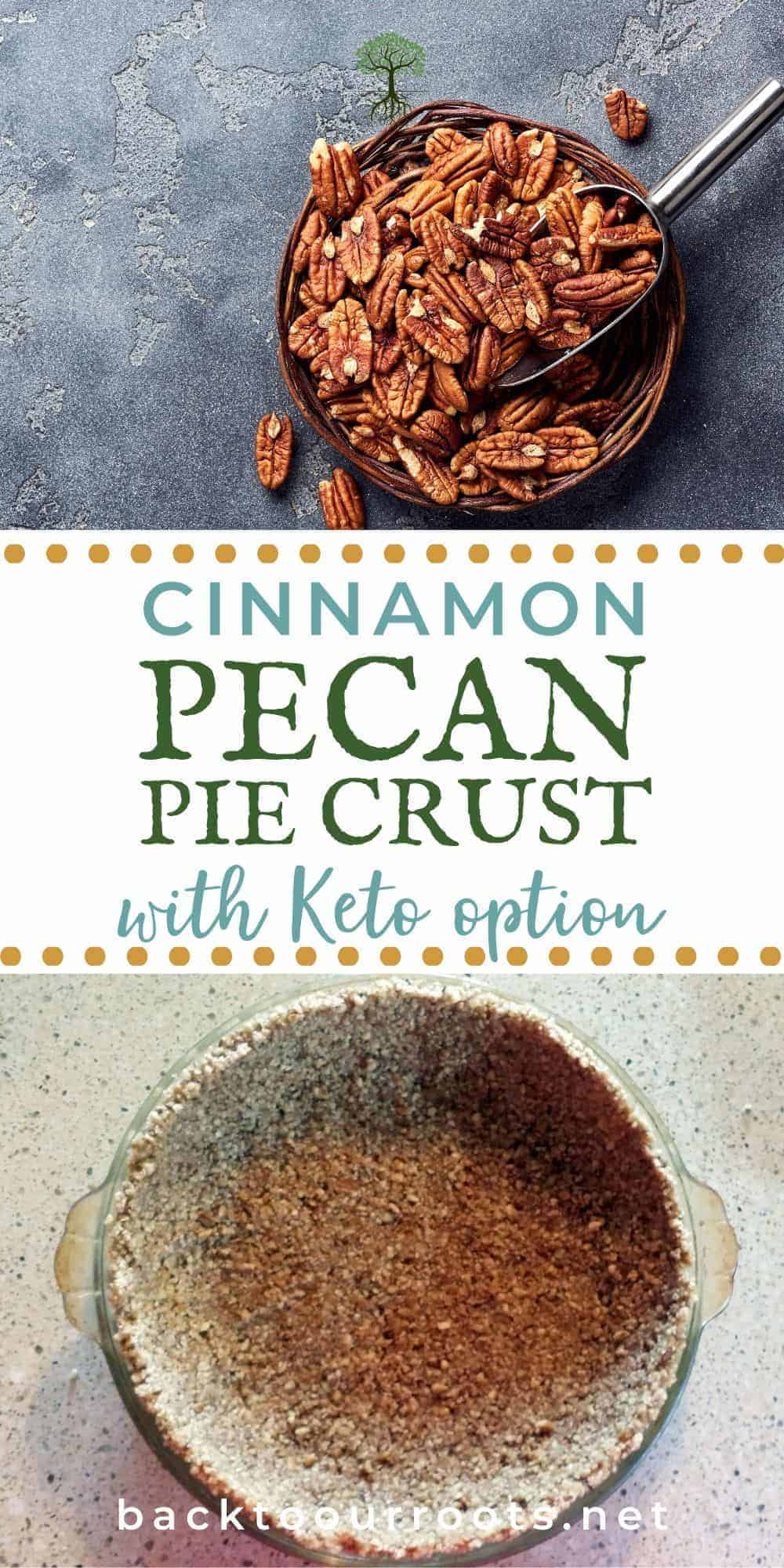 This crust is perfect for those of you that are avoiding gluten.

And I even included a keto friendly option!

NOTE: For a keto friendly version of the crust, simply replace the sugar with the granulated sweetener of your choice.

You can do that by hand or in a food processor.

Be careful if you’re using a processor. You don’t want pecan butter.

Which is a thing.

But not so good for crust.

Melt the butter while you’re chopping the pecans.

I like to use my cast iron butter melting pot

to melt it in.

Just pop it in the oven while it’s preheating and, Presto! Melted butter.

Next, put the chopped up pecans in a small bowl and add the cinnamon and sugar or sugar substitute.

Mix that up good and then add the melted butter and mix until the butter is evenly distributed.

When it’s all mixed up good it holds together kinda like wet sand. 🙂 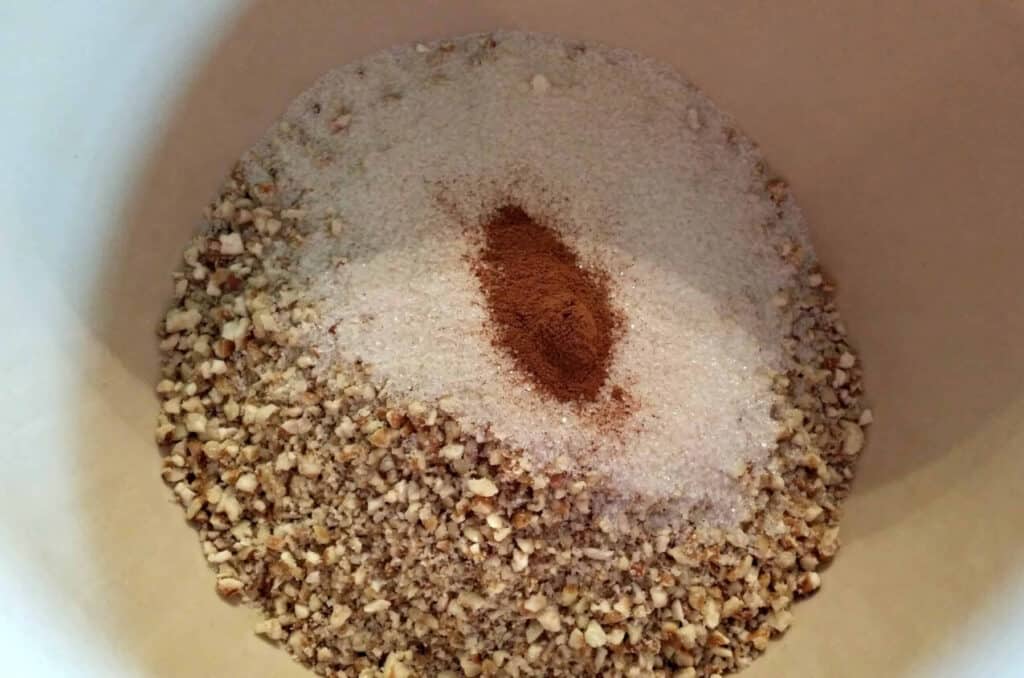 Press the pecan mixture into the bottom of your pan(s).

And then press the mixture up the sides for a pie.

If you are making a cheesecake, just press it into the bottom.

The cool thing about this recipe is that you can put it all in a regular pie pan or it has a fairly thick crust, or split it between two for a thinner crust, or even use a deep dish pie pan.

There’s crust enough for all! 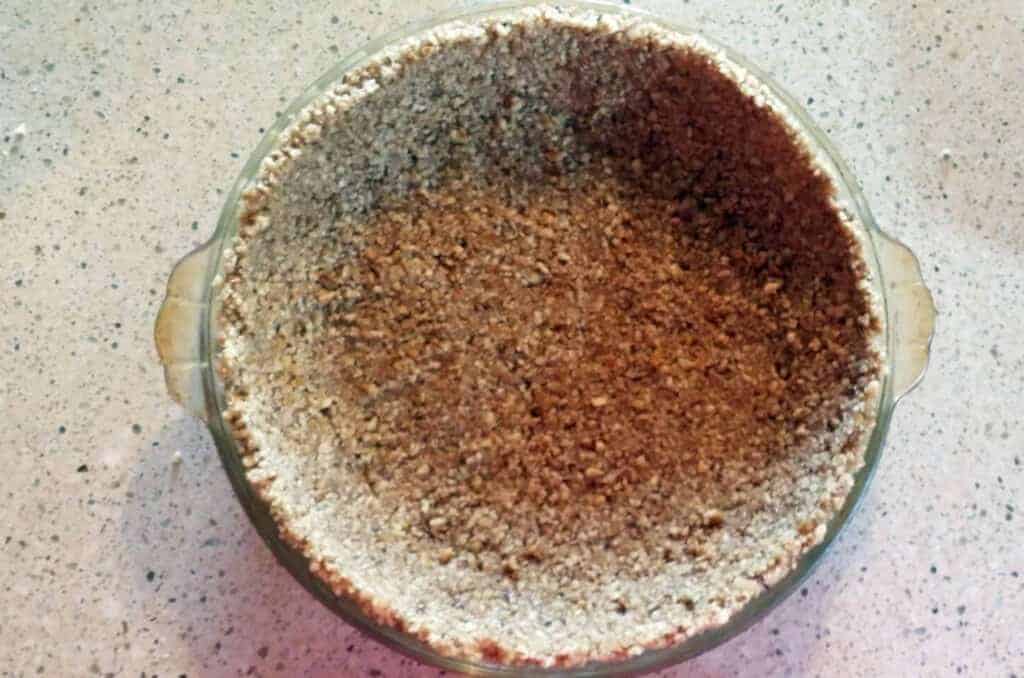 pecan mixture pressed into the pie plate and up the sides

Bake the pecan crust in the preheated oven for 12-15 minutes.

Only until it’s lightly browned. Nuts burn easily, so be careful.

I take any leftover crust mixture and spread it on a cookie sheet and bake it at the same time.

Then I have something to use as a garnish for the tops of cheesecake or to sprinkle over yogurt.

And if you are topping your pie with whipped cream, it makes a lovely crunchy counterpart to that as well!

Finally, cool the crust completely before adding the filling.

PLEASE NOTE: If you are using this crust for a baked pie, like pumpkin pie or apple pie, carefully pour the filling into the uncooked crust and bake as long as your recipe calls for.

What would you put in this amazing crust? 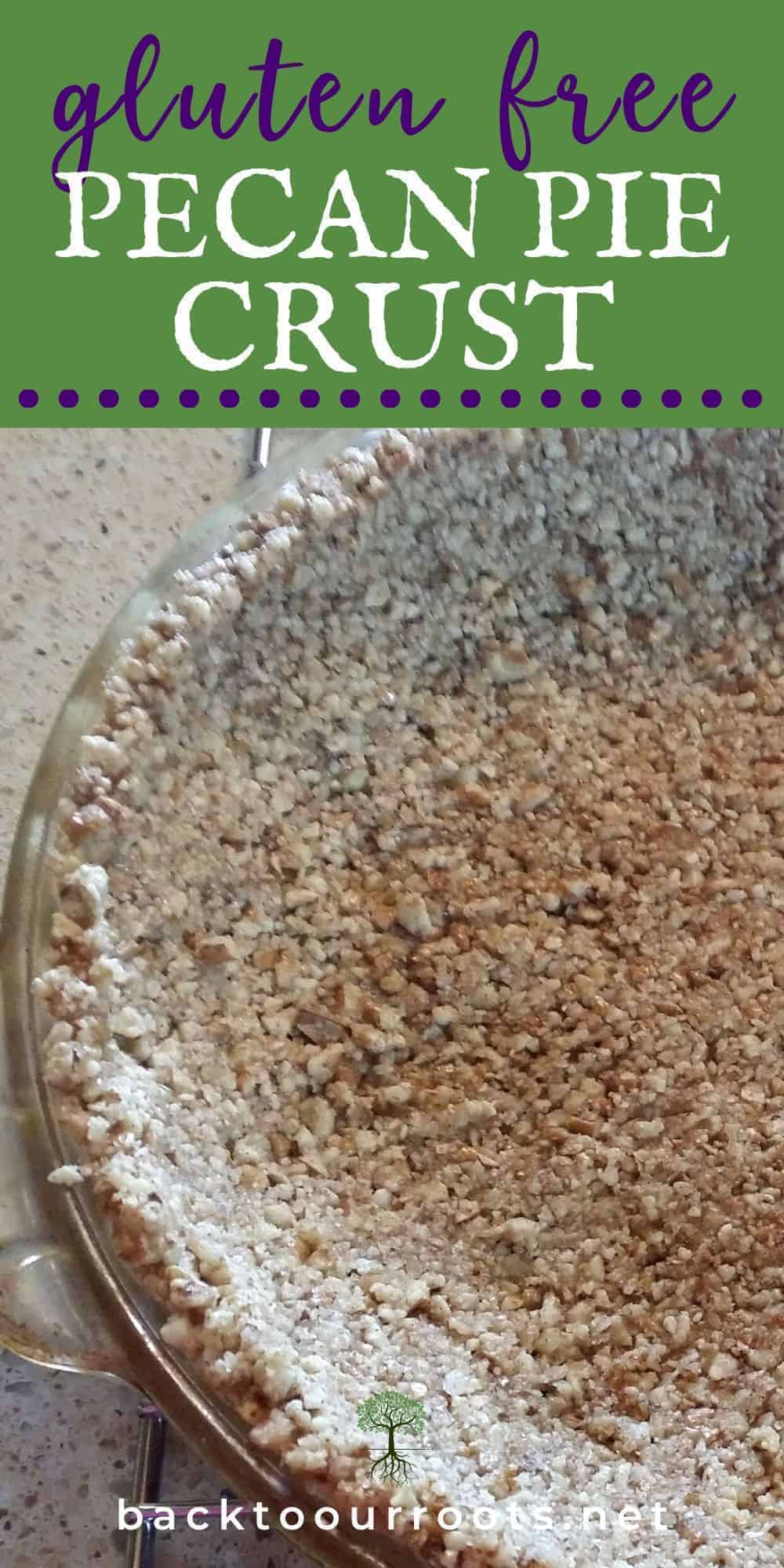 More amazing things you should bake: 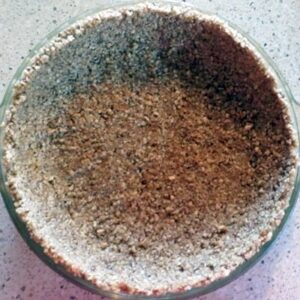