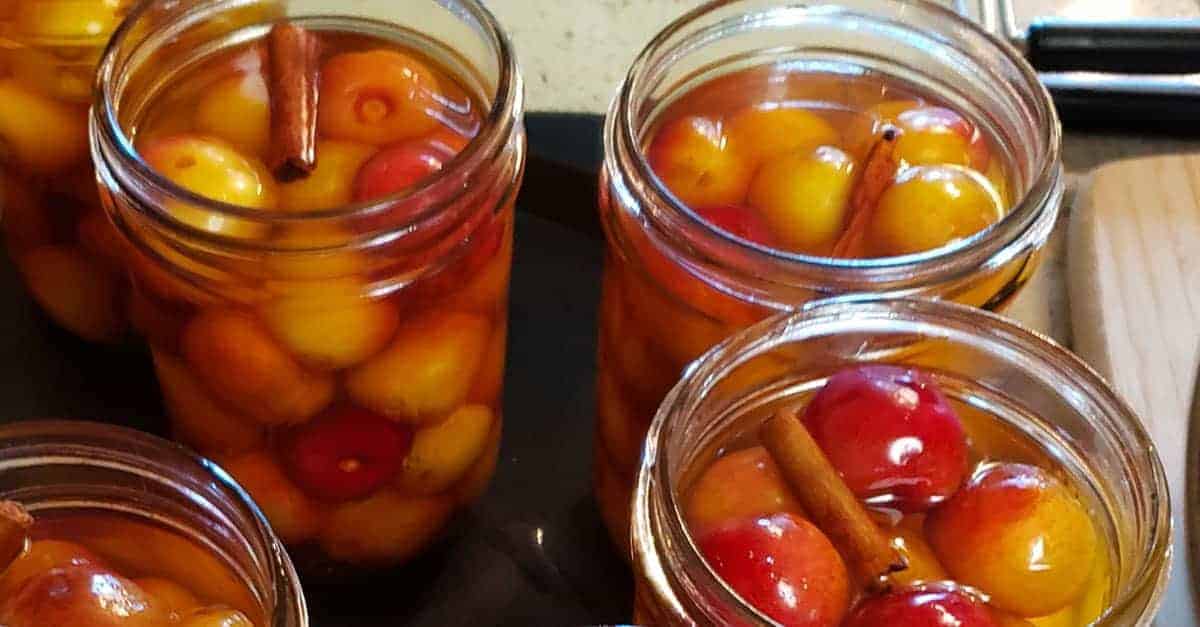 This is my absolute favorite canning cherries recipe!

And the juice is ridiculously good too!

You could make oatmeal with it, heat it up for cinnamon hot apple cider, or thicken it up and use it as a sauce for bread pudding.

I am happy to report that I have done all three…

In the US, cherry season begins in late April and goes through late August.

Different varieties are ripe at different times and harvesting starts in the south and heads north as the season progresses.

I tend to can cherries all season.

Cuz I love to can. And I love cherries.

I use the pie filling to make pies, of course. But also for Cherry Cream Cheese Pie and to warm up and serve over Sourdough Waffles or pancakes.

Dehydrating cherries is another favorite way of preserving cherries. I like the even sweeter ones like Lambert for dehydrating.

I use dehydrated cherries in my Sourdough Cherry Scones.

You can use any kind of cherries you want to in this recipe.

In the pictures you will see Queen Anne cherries. They are so pretty! 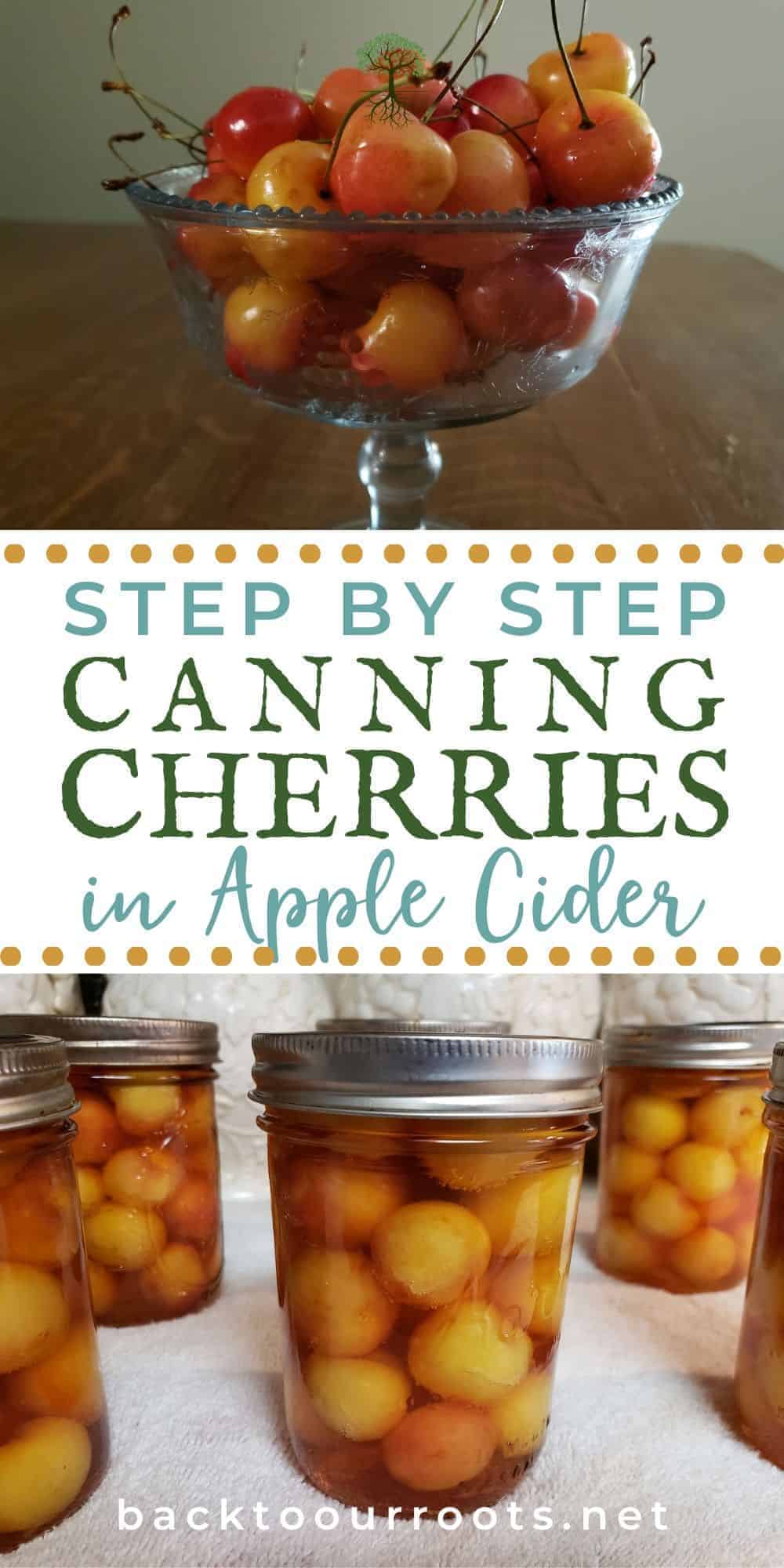 I wanted 8 pints so I bought 10 lbs of cherries.

And then we just ate what was left. 🙂

Fill your canner with water and put the number of jars into the canner that you are going to be using.

This allows the jars to warm up and stay hot until they are needed.

Turn the heat to high and bring the water to a boil.

Prepare your lids according to the manufacturer’s instructions.

Now, put the apple cider in a large pot and bring it to a boil. Reduce the heat and allow it to simmer.

Run some cold water into your sink.

Now dump the cherries in and swish them around good. Then go ahead and remove all the stems.

Check the cherries for bad spots or bad bruising. Cut off the bad parts.

When you’re canning cherries you normally pit them. For this recipe you actually have a choice. 🙂

But if you’re going to pit them, now is the time to do it.

I don’t for this recipe, and that makes it a lot faster.

Once your cherries are ready to go, use your jar lifter and take the jars out of the canner. When you remove the jars dump the water back into the canner, and put them on your work surface. 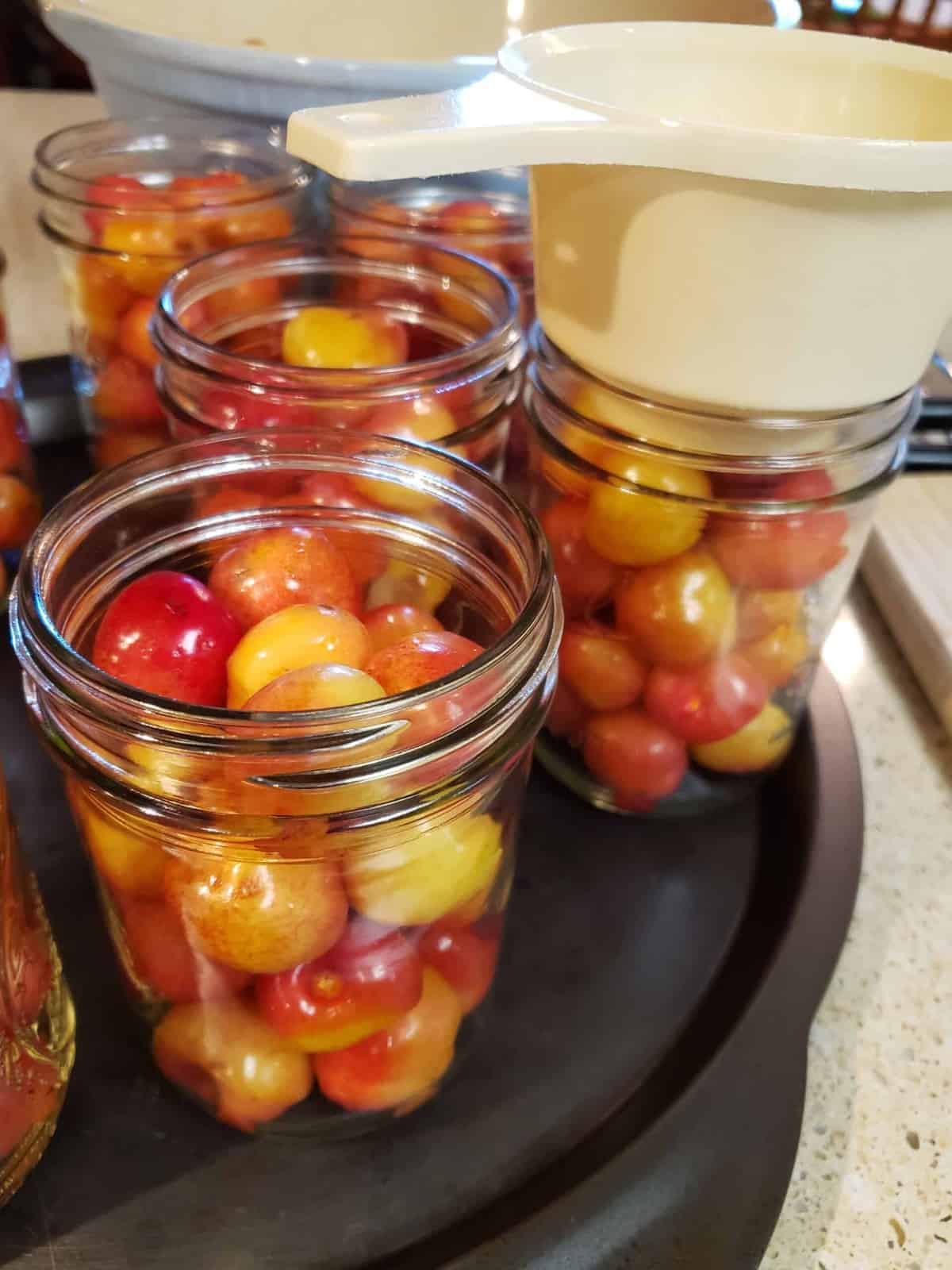 Once the cherries are packed into the jars, place one piece of cinnamon stick into each jar and add 1 tsp of the almond extract.

Now it’s time to ladle the hot apple cider into the jars, again leaving the ½ headspace.

Release the trapped air inside the jars with a thin knife or bubble popper and top off with cider if necessary.

Now carefully wipe off the rims with a clean cloth dipped in white vinegar. That will cut through the stickiness of the apple cider and clean the rims well.

cleaning up the rims

Use your lid lifter/magnetic wand thing to pull the lids and rings out of the warm water.

Carefully seat the lids and screw on the rings finger tight. Don’t over tighten or the air won’t be able to exhaust from the jars.

Now, using your jar lifter again, carefully put the jars into the canner rack. Make sure that you life the jars straight up and straight back down. Don’t tilt them to the side.

Lower the rack into the canner, and bring the water back up to a boil. Once the water is at a rolling boil, begin your processing time.

Cherries in apple cider need to process for 20 minutes for pints, 25 minutes for 1 ½ pints, and quarts.

If the water stops boiling, you must bring it back to a boil and start your processing time again.

Don’t forget to adjust the processing time for your altitude. Click here for the altitude adjustment chart.

After processing, remove the jars from the canner and put them on double layers of old towels on a counter top that’s out of drafts.

They’re going to be hot for a few hours, so don’t put them right in your way.

Allow the jars to sit undisturbed for a minimum of 12 hours.

After 12 hours, check the seals.

If you have jars that didn’t seal you can reprocess the jars or put them in the fridge and use them within 2 weeks.

Which, trust me, won’t be hard.

If the seals are good, wash and label the jars, and put them away.

Store in a cool, dark, dry place, and these cherries will last for several years.

This is one of the easiest preserved cherries recipes I’ve ever done. They taste good and look spectacular in the jars, too.

Looking for more amazing waterbath canning recipes? Grab a copy of my eBook “The Basics of Waterbath Canning” today! 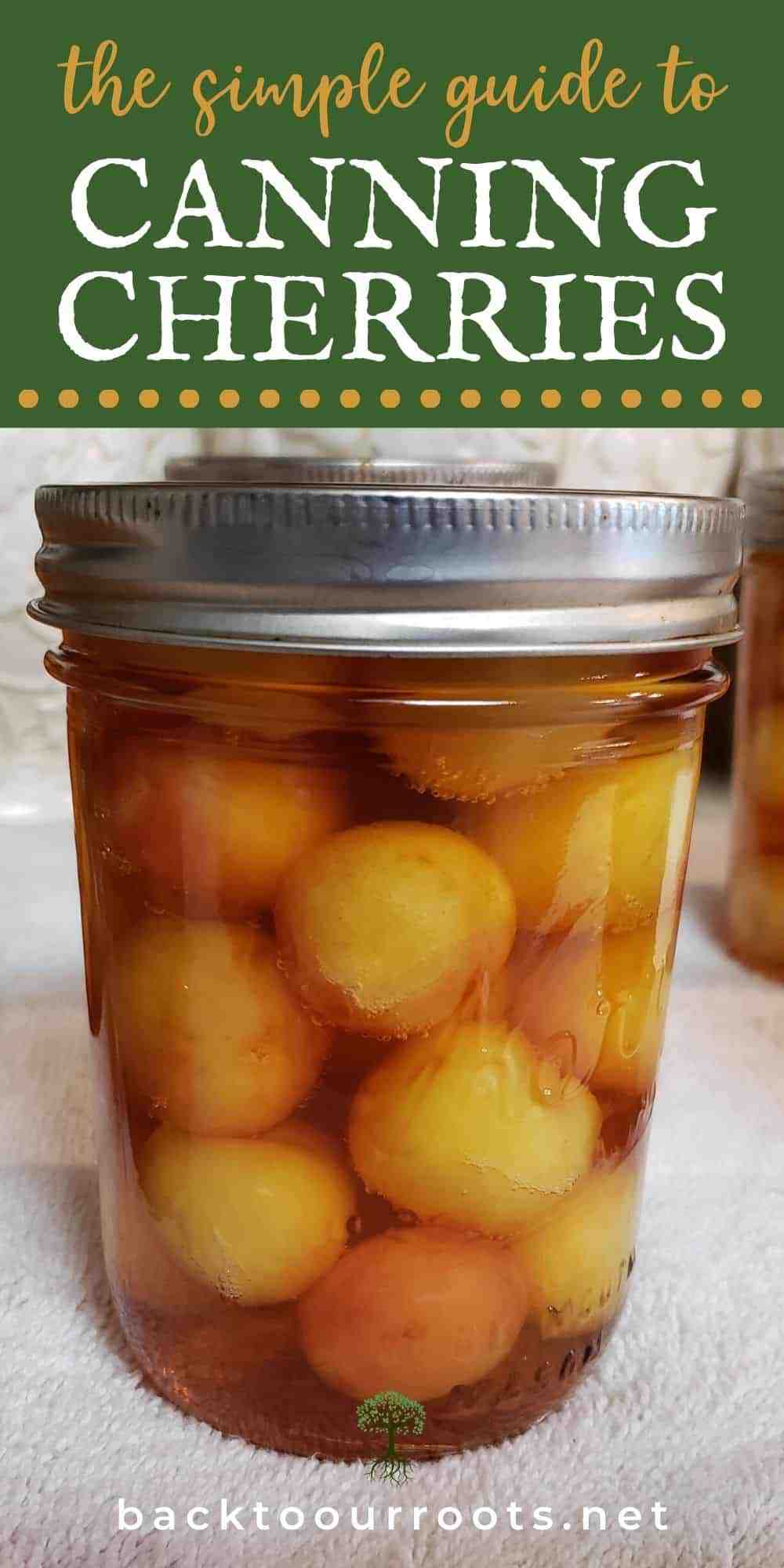 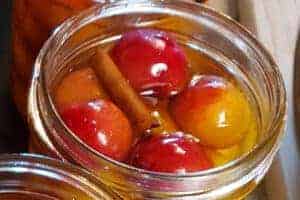 How to Make Fire Cider for Immune Support

Grab your free copy of the Commonly Canned Foods CheatsheetsGet it Now!
+