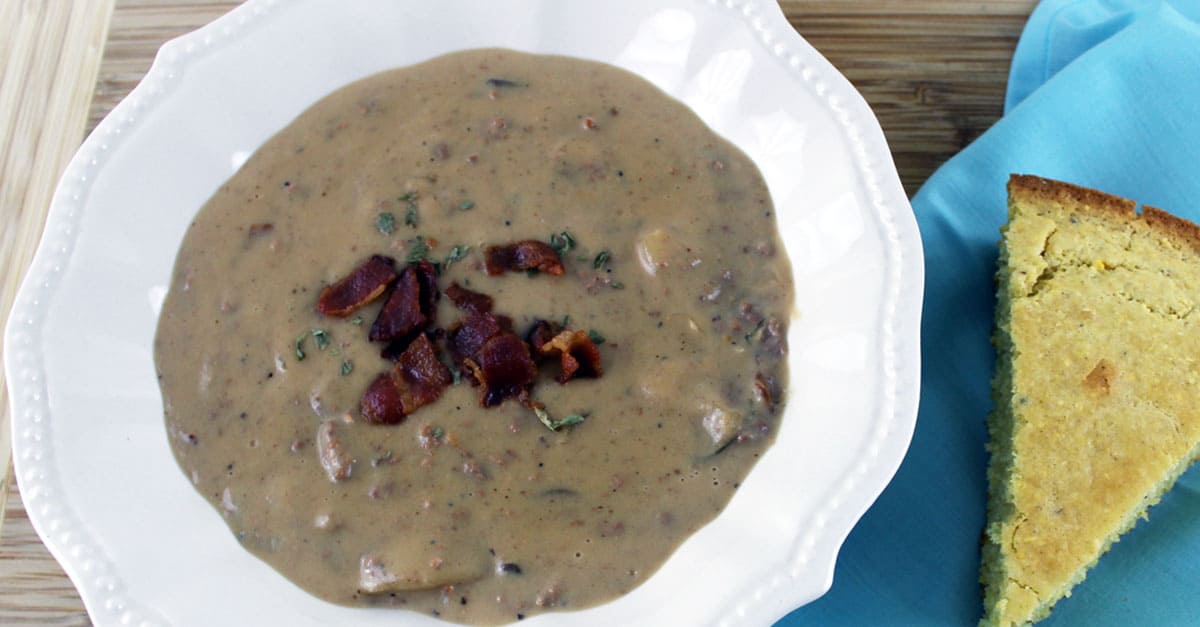 Need a great filling meal for a chilly weeknight?

This Beef and Bacon Chowder is rich and delicious, but so fast and easy to put together!

It’s a favorite cooking-from-the-canning-pantry recipe that uses home canned ground beef, potatoes, and mushrooms. I even throw in some homemade beef bouillon.

If you don’t have any of those home canned items in your pantry, no worries!

I’ll give you instructions for subbing fresh meat and potatoes.

Either way, you’re gonna love it!

I like to serve Beef and Bacon Chowder with fresh, hot Sourdough Cornbread (or in a Sourdough Bread Bowl).

But a piece of garlic bread would be good too. Or even just a plain ole chunk of French bread.

Whatever makes you happy!

So go grab a cute apron and let’s get started! 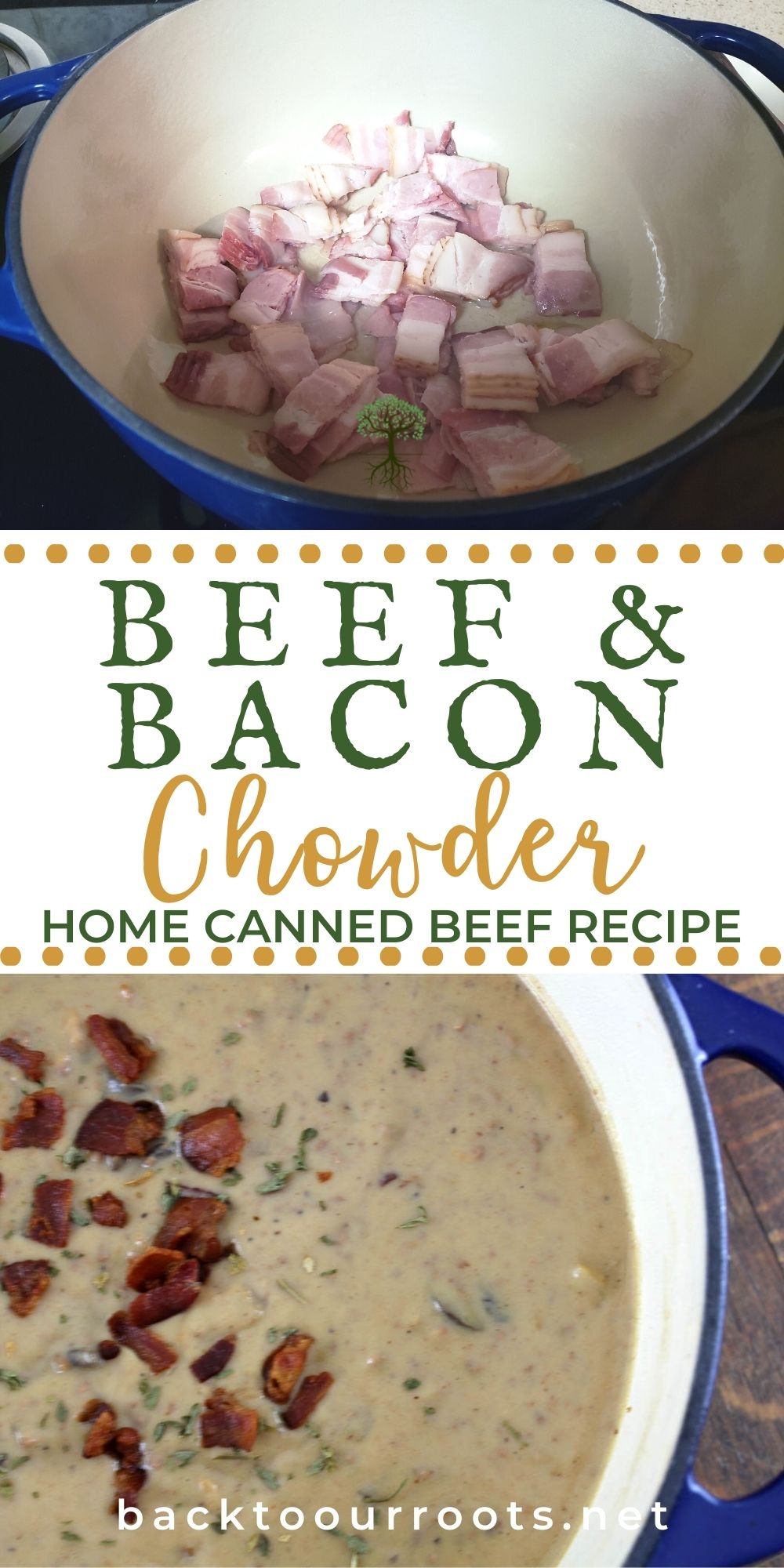 NOTE: If you don’t have canned potatoes, you need to start your potatoes first.

Put them in a pan and cover them with water. Add a pinch of salt.

Cover and bring to a boil. Turn down to a simmer and cook for 7-8 minutes.

You don’t need to cook them all the way, just partially. They will finish up in the chowder.

Remove from the stove, leave the potatoes in the water and set them aside for now. You’ll need some of the potato water later.

While your potatoes are cooking follow the rest of the directions.

I have fallen in love with this Lodge Dutch Oven! I have a stainless steel one, but this is my first enameled cast iron one. It’s made a world of difference!

I’ve found that a a pair of kitchen shears works really well for cutting up bacon.

Way better than a knife does.

However you cut it up, toss it into the Dutch oven and fry it until it’s crispy. Take the bacon out of the pan and drain on a wire rack or paper towel. 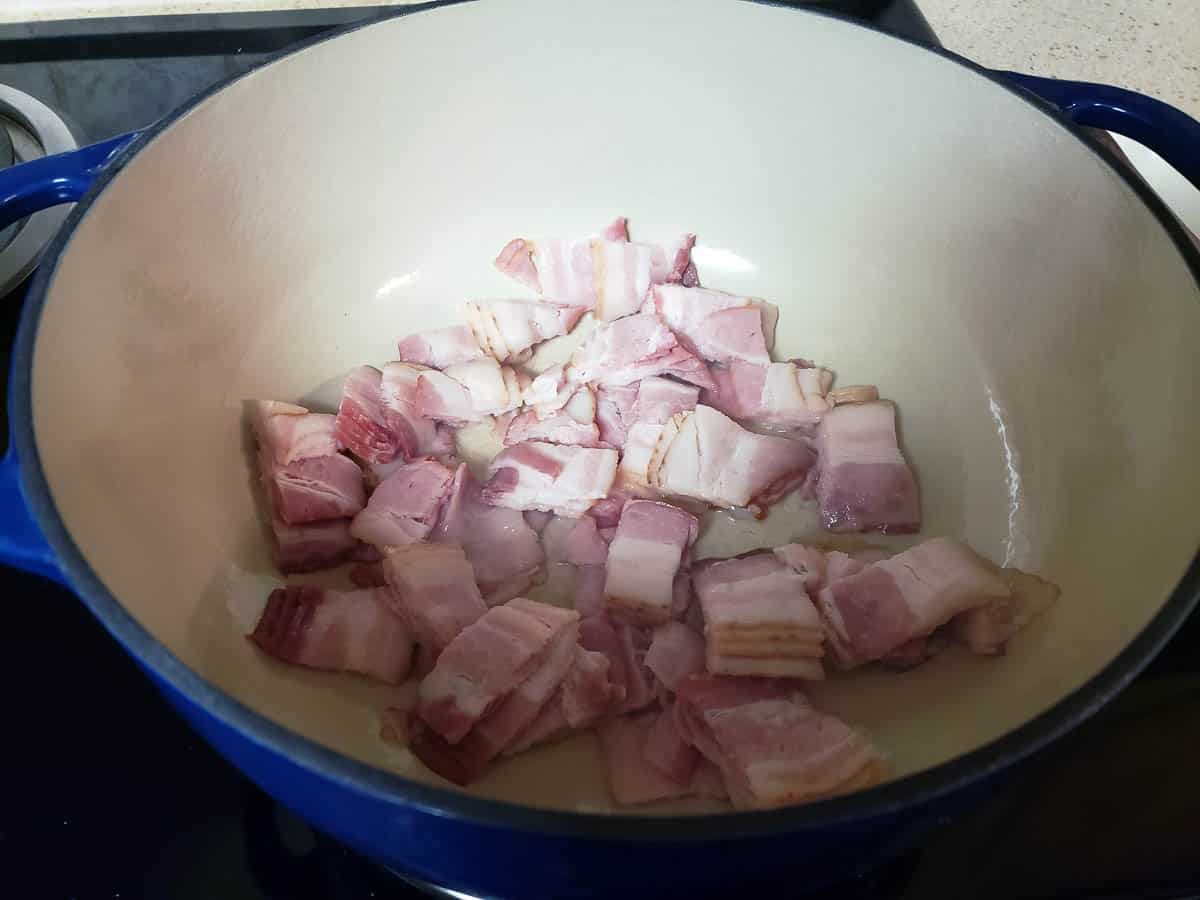 Once the bacon is cool enough to handle, crumble it up.

Now add the chopped onion to the hot bacon grease in the Dutch oven and cook them until they are translucent. Make sure you stir them though so they don’t burn. 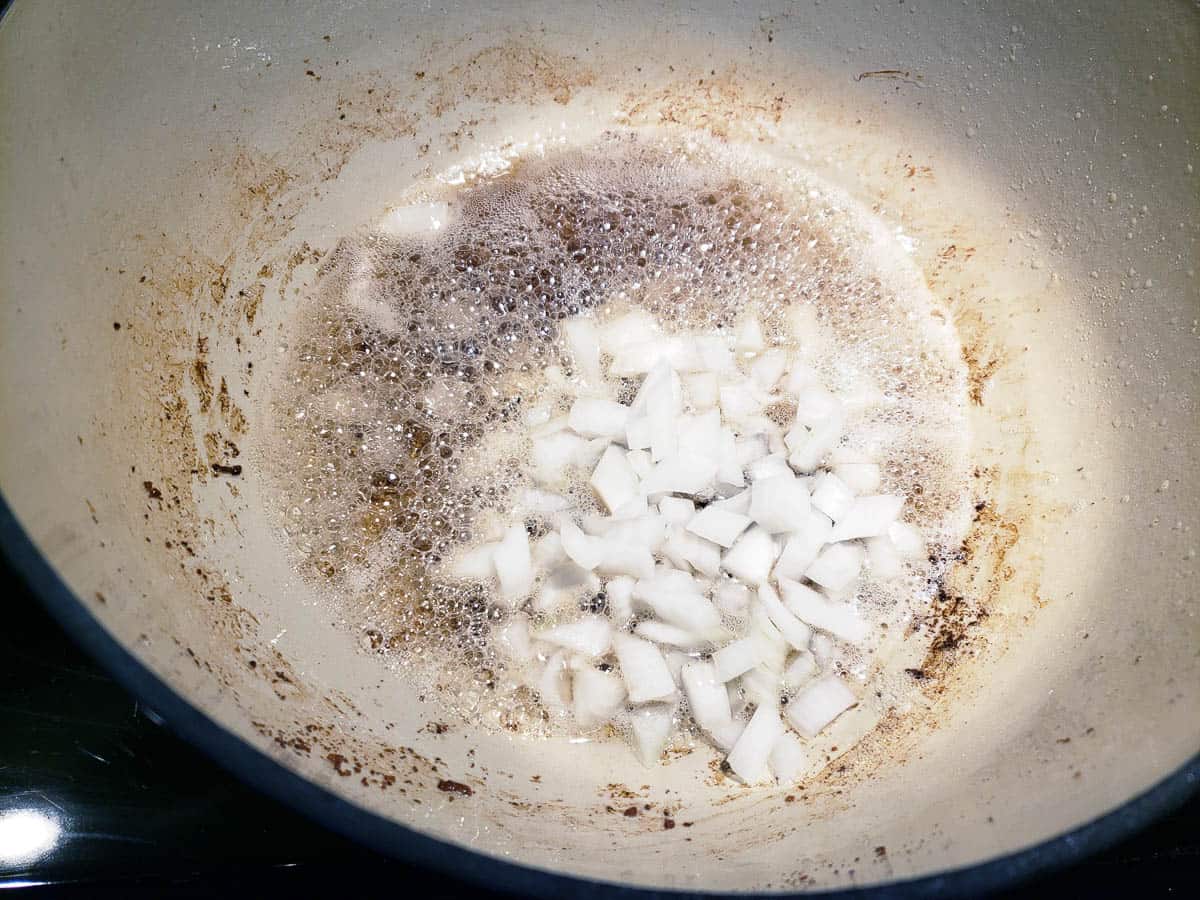 Seriously, is there any aroma better than onions frying in bacon grease?

When they are ready take them out of the pan and set them aside as well.

NOTE: If you are using fresh ground meat, crumble it up into the hot fat and cook it until it is no longer pink, stirring often. Remove from the pan and set aside.

Drain the bacon grease from the pan, reserving 4 Tbsp and return that to the Dutch oven.

Whisk in the flour and cook that until it’s browned, about 2 to 3 minutes. You need to whisk this constantly. 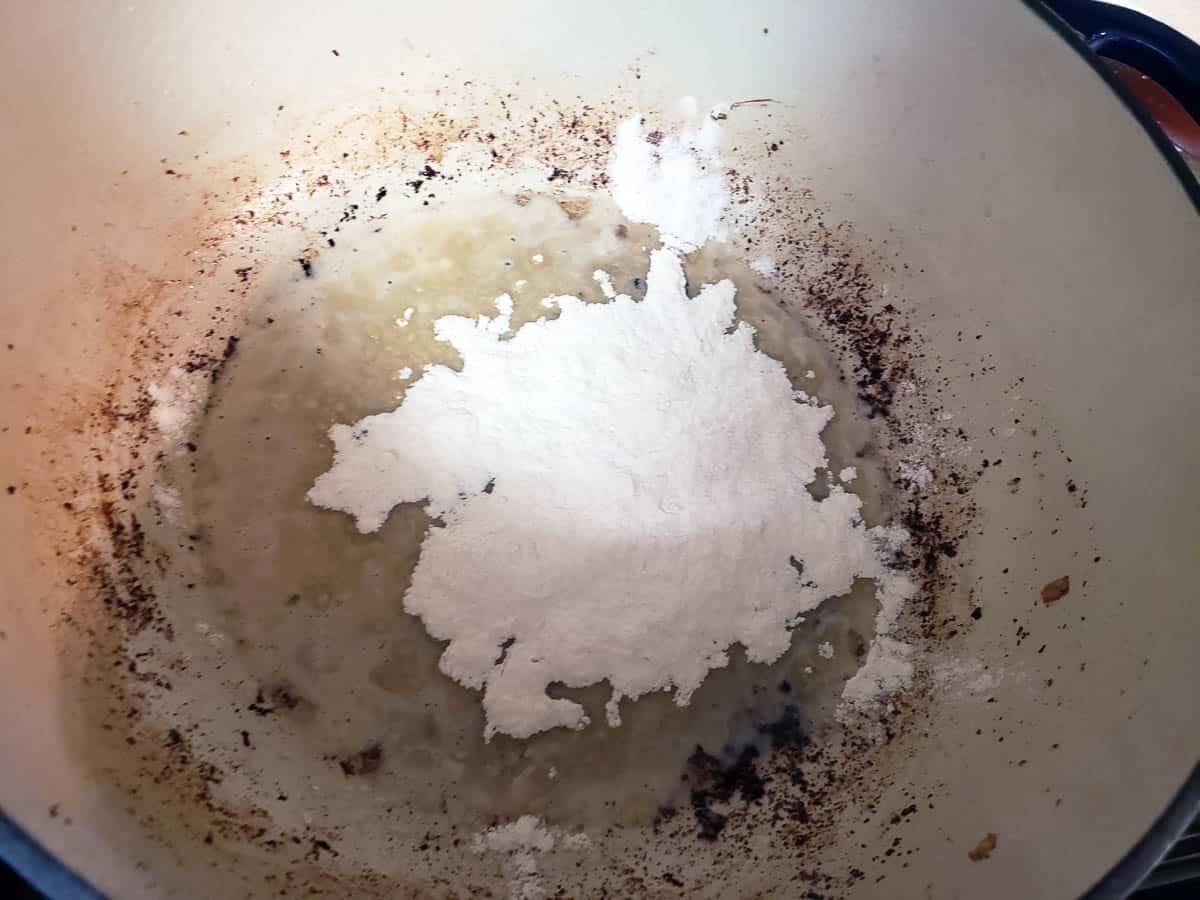 After the rue is nicely browned, add in the beef bouillon and whisk that in as well.

Now you need to add the milk all at once and whisk till smooth.

Continue cooking and whisking until the chowder base thickens, about 2 to 3 minutes. It will be quite thick.

Thicker than you think it should be, probably.

Once that base has thickened up nicely return the onions and 3/4 of the crumbled bacon to the pan. (You did remember to crumble the bacon, right?)

That last 1/4 of the bacon is for garnishing the top to make it look cool. If you don’t feel the need for cool soup, just toss it all in. 🙂

Now that you’ve added whatever level of coolness you desire to the base, add in the ground meat, potatoes, and mushrooms. Just toss it all in, including the liquid in the jars.

NOTE: If you are using freshly boiled potatoes you will not need all the water. Just add enough to thin the chowder to your desired consistency.

Add the salt and pepper and adjust the seasonings as necessary for your taste. 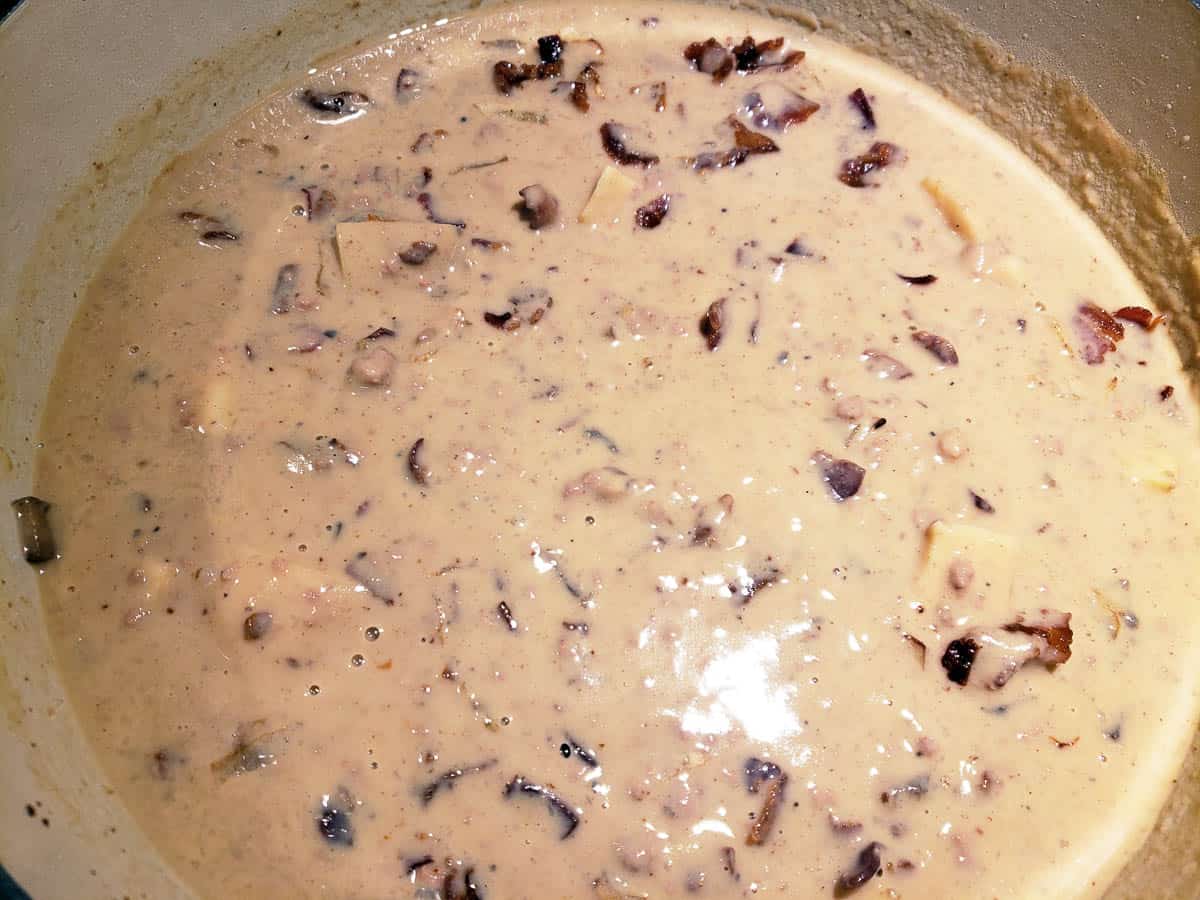 If the Beef and Bacon Chowder is still too thick for your liking you can thin it out with a little more milk.

Stir well and cook until heated through. Make sure to stir often so it doesn’t stick.

Beef and Bacon Chowder freezes well. Canning jars are really handy for freezing soups. Just make sure you leave about an inch of headspace so the jar doesn’t crack.

A pint jar will hold enough for a generous serving for 1.

Once it’s thawed, put it in a pan to reheat.

It’s possible that it may separate as it’s thawing.

Here’s more recipes to use your home canned ground beef: 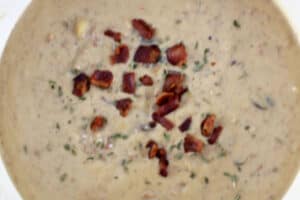